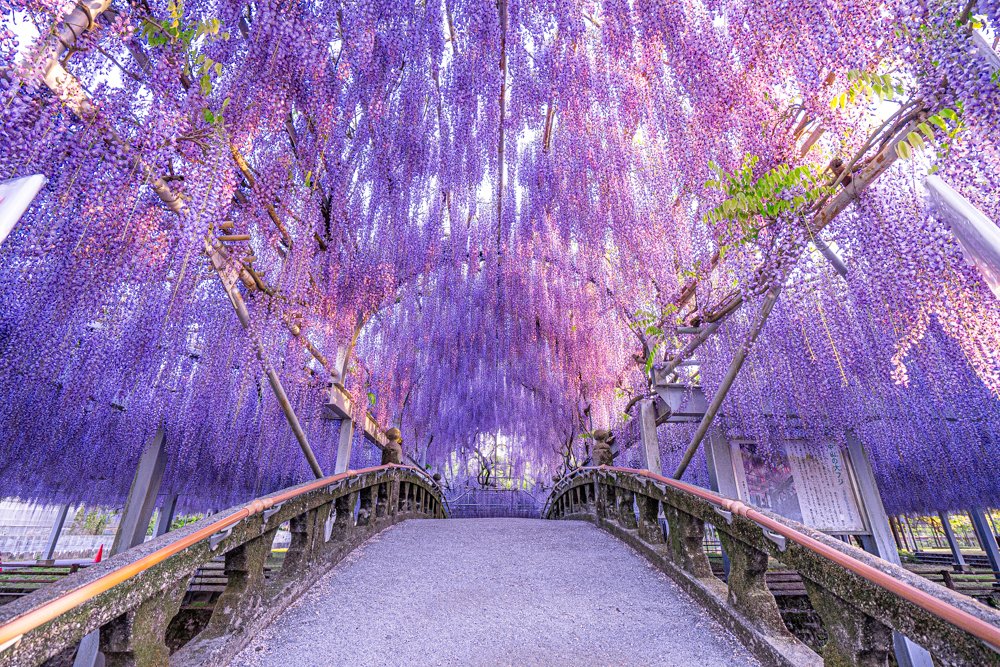 At Ashikaga Flower Park, pink, purple, white, and yellow wisteria are in full bloom in order, and many tourists from home and abroad visit.

At the “Japanese wisteria Festival” in Ashikaga Flower Park, it was lit up, and it became a hot topic that it looked like a scene from “Demon Slayer”

When the wisteria is in full bloom

Many kinds of wisteria trees are planted in Ashikaga Flower Park, and they bloom in order and reach full bloom.
The colors of the wisteria flowers and the approximate time of full bloom each year are as follows.

・The first to bloom is light red wisteria (pink wisteria)

The best time to see is from mid-April to late April (10 days or more depending on the temperature and weather of the year, the best time may change).
When it is in full bloom, it looks like a pink river is flowing overhead.

・White wisteria is in full bloom after Japanese wisteria

For reference, the 2022 holding period and admission fee are shown.

Where to get discount coupons

Discount coupons for Ashikaga Flower Park can be obtained at JR stations, highway SAs, and nearby hotels.
At JR Ashikaga Station, a leaflet with a ¥ 100 discount coupon was placed on the station rack for several years in a row.
In addition, the admission ticket comes with a “re-visit discount ticket” that can be used from the next day, so you can use it if you go to see it the next day or later.

The cheapest is advance tickets that can be purchased at convenience stores, but in 2020 they were not sold due to the issuance of a state of emergency.

While the wisteria flowers are in full bloom, there is a long line at the ticket office.
I think it’s best to buy an advance ticket that is the cheapest and allows you to enter without lining up.

About re-entry on the day

Ashikaga Flower Park cannot be re-entered even on the day of the event.

You can re-enter if you have forgotten something in your car and you cannot stop, but you will not be able to re-enter unless you return in a short time.

Gourmet in the park

At the restaurant in Ashikaga Flower Park, you can eat mainly Japanese food.
However, the disadvantage is that the prices are high and the seats are often full during the period when the wisteria flowers are in full bloom.

Tobu Railway’s “Ashikaga-shi Station” is easily accessible because it can be reached from Asakusa Station without changing trains, and it is convenient because there are many trains in operation.
However, the distance from Ashikaga-shi Station to Ashikaga Flower Park is about 7.9km.
It is a difficult distance to walk, so you need to walk about 1.2 km from Ashikaga-shi Station to JR Ashikaga Station and take the Ryomo Line to Ashikaga Flower Park Station, or take a paid shuttle bus.
If you use a paid shuttle bus, you are likely to get caught in a traffic jam, so it is recommended that you make a schedule with plenty of time.

※In 2021, the shuttle bus service was canceled to prevent infection with the new coronavirus.

In early May, when the wisteria flowers are in full bloom, Ashikaga Flower Park is visited by many tourists from Japan and abroad.
It is also attractive to enjoy a completely different beauty during the day and at night when it is lit up.
It is recommended to enjoy both the daytime and the illuminated wisteria at night.