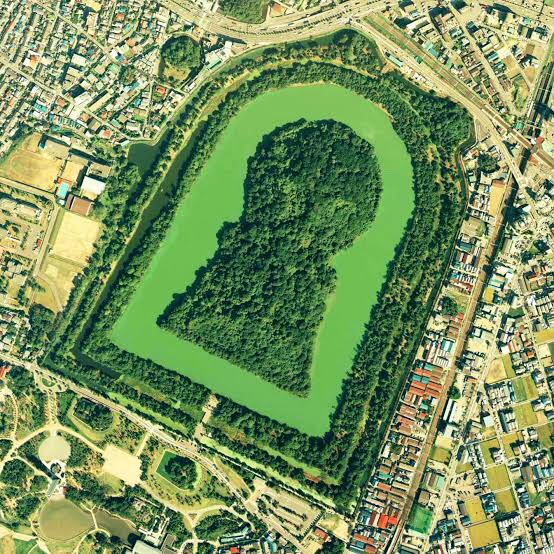 Everyone, this is actually a place in Osaka, Japan.
What do you think it is?
Does it look like a keyhole in the door where the important things of the earth are hidden?
It’s actually a grave.
This grave is a UNESCO World Heritage Site.

This tomb is the Nintoku-Tenno-Ryo Tumulus (仁徳天皇陵).
The Nintoku-Tenno-Ryo Tumulus is an ancient burial mound (Kofun) located in Daisen-cho, Sakai-ku, Sakai City, Osaka Prefecture.
It is also called “Daisenryo-Kofun” or “Daisen-Kofun”.
Due to the characteristics of the excavated items such as the cylindrical ring, it is believed that it was built over about 20 years in the first half to the middle of the 5th century.

The Imperial Household Agency has settled on the tomb of Emperor Nintoku (仁徳), but the burial person is not clear.

What kind of person is Emperor Nintoku?

Emperor Nintoku, the 16th emperor of Japan.
His reign is said to be 87 years.
He settled in Namba, Osaka, and was exempt from tax for three years when he noticed that smoke was not rising from ordinary people’s houses.
On the other hand, there is also a depiction of being jealous of his empress as an amorous emperor.

The size of the ancient burial mound is the largest in Japan!

The Nintoku-Tenno-Ryo Tumulus is an ancient burial mound that is square in the front and round in the back with a front length of 525m (rear circle 286.33m, front width 347m).
The length of the burial mound is 100m longer than the 425m of the Ojin Emperor’s Mausoleum in Habikino City, Osaka Prefecture, which is the second largest burial mound in Japan.

One of the three major tombs in the world

The Nintoku-Tenno-Ryo Tumulus, which is said to be one of the three largest tombs in the world.
The Pyramid of King Kufu is 230m long, and the Mausoleum of the First Emperor is 350m long.
Compared to the tombs of the two kings, you can see how big they are.

To get a panoramic view of an ancient burial mound that is square in the front and round in the back like a key hole, you need to climb up to an altitude of about 300m.
There are no such tall buildings in the area.

Even if I couldn’t see the keyhole, I was still impressed when I saw the Nintoku Emperor’s Mausoleum with my own eyes.
Please visit when you visit Osaka.