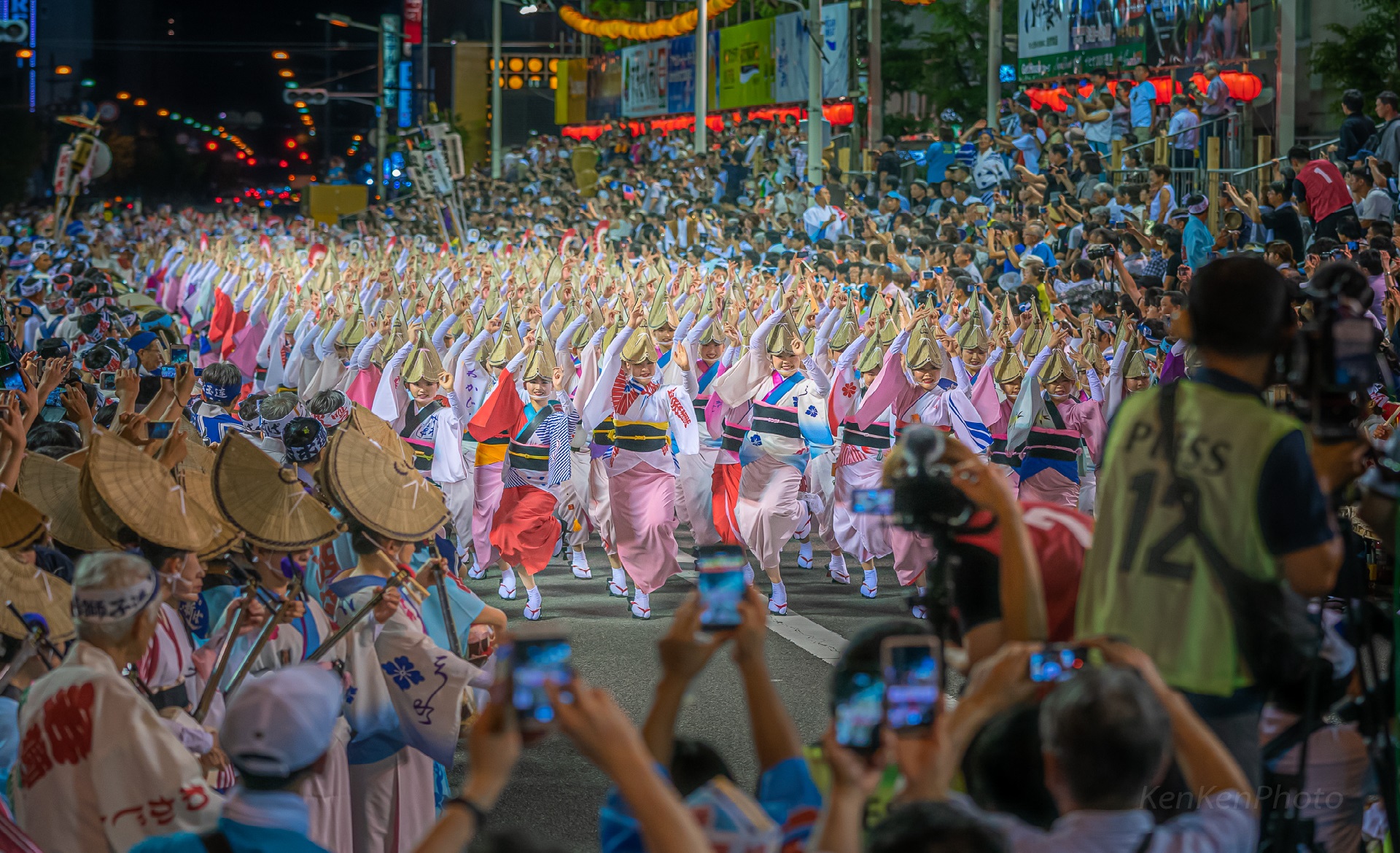 “Awa dance” is one of the three biggest Bon festival dances in Japan held in Tokushima City.

It’s an enthusiastic summer festival that envelops the whole city of Tokushima with the enthusiasm of dancing to the rhythm.
“Awa dance” has a history of over 400 years.
It will be held in Tokushima City for five days in August.

The city is filled with excitement of Awa dance

The “Awa dance” which is the most exciting event in Tokushima, is held around August 12 to 15 every year.

In the evening, the music and screams begin to sound, and the city is filled with a hot and unique atmosphere.
In addition to paid and free theaters, you can see dances at various places throughout the city, such as the Odori Square and the shopping district.
There is also a “Niwaka Ren” where anyone can participate in the dance with their everyday clothes!

There is a musical instruments as an important entity that constitutes the Awaodori.
One of the attractions of Awa dance is that you can listen to the live performance of this music!
The musical instruments played in front of the audience are powerful.

It produces a high-pitched, well-resonant and impressive sound.
It is said that it was the first instrument used in the Awa dance, and it is often used to signal the beginning of a dance.
It is a sounding instrument that is indispensable for leading the performance, and is often handled by a skilled person such as a leader.

Awa dance uses traditional Japanese flutes.
The flute, which is a melody instrument, plays a clear sound that stands out among the music.

Shamisen is indispensable for Awa dance.
Playing a traditional and old-fashioned tone, it makes the audience looking excited.
Also, it is particularly important that the timbre of the shamisen and flute are the same in the Awa dance.

It is this big drum that produces a lively sound that echoes to the bottom of the stomach.
It’s the largest instrument of all kinds, and usually comes with a string that passes through your back so you can hit it in front of your stomach.
The performance of this big drum is quite powerful, and a certain amount of muscular strength is required to play the big drum sound sufficiently.
Big drum plays a role in enlivening Awa dance.

It is a small drum compared to a big drum and plays a light sound.
It is fixed so that it can be hung from the neck so that it can be hit under the base of the foot.
It is a sounding product that produces a pleasant sound, and it is a good accent when played together with a big drum.

The above are the main sounds played in the Awa dance, but in addition to these, there may be cases in which other musical instruments such as bamboo and barrels are independently adopted by group.
Playing music is the real pleasure of the Awa dance Festival, so be sure to pay attention to the music when you go to see the festival.

To you who want to go to the authentic Tokushima!
Hotel information you want to enjoy with Awa dance