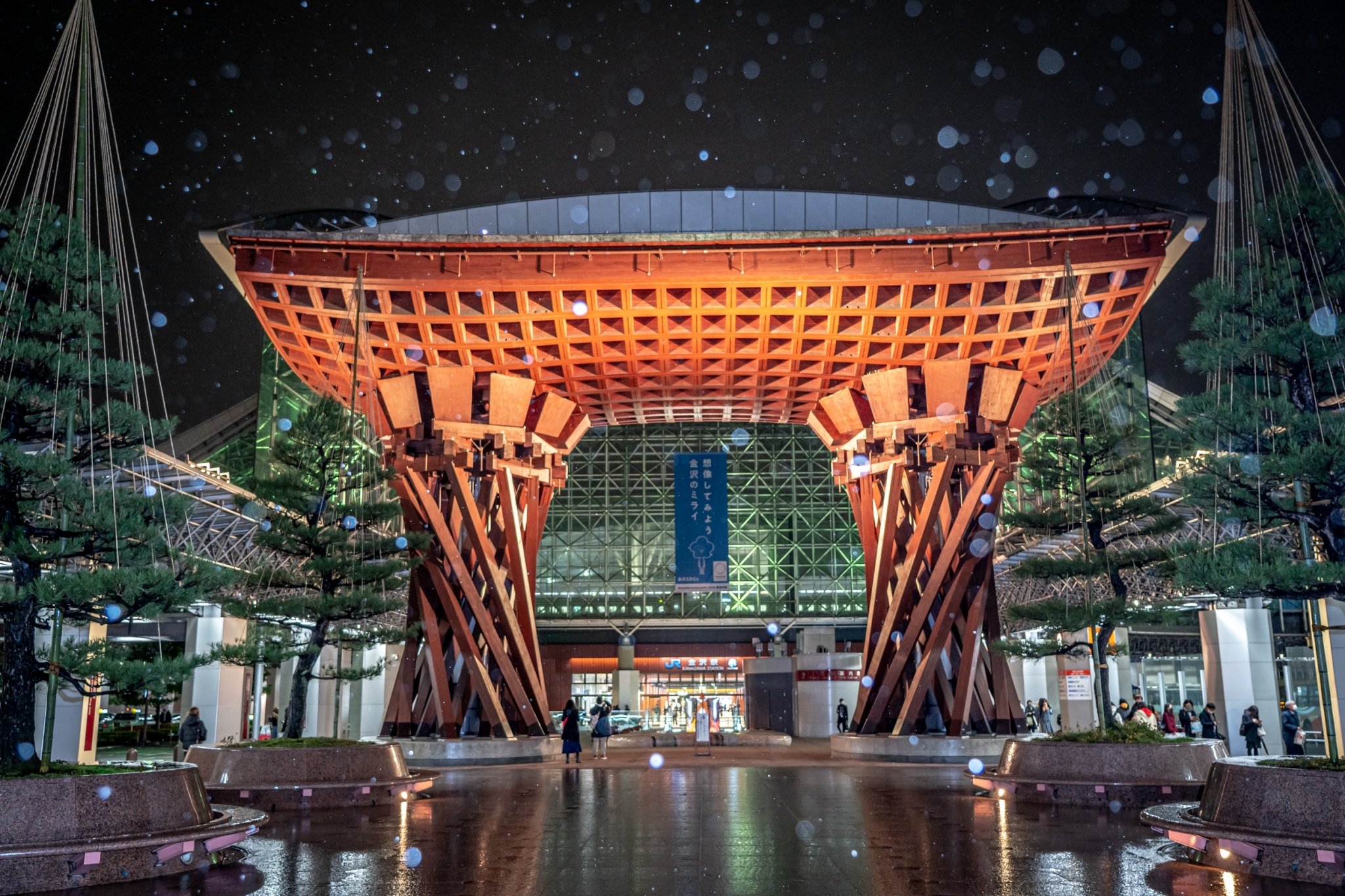 Ishikawa Prefecture, where the castle town still remains and you can experience the old days of Japan.
It is one of the most popular prefectures among Japanese people because it has abundant hot spring towns and faces the Sea of Japan, so you can enjoy fresh seafood.
Among them, Kanazawa City is full of highlights, such as Kanazawa Castle, Kenrokuen Garden, Samurai Residence, and Chaya District.

At Kanazawa Station, which is the starting point for sightseeing in Kanazawa, there are some spots that you should take a look at.
This time, we will introduce Tsuzumi-mon Gate at Kanazawa Station.

Tsuzumi-mon, the symbol of Kanazawa Station

Tsuzumi-mon gate in the East Square of Kanazawa Station was born in March 2005.
It is popular as a new symbol of Kanazawa Station.
Its unique and splendid structure has been highly evaluated not only in Japan but also overseas, and in 2011, it was ranked in the 14 most beautiful stations in the world in the web version of the American travel magazine Travel & Leisure.
It was the only ranked station from Japan among the many beautiful stations in the world such as Antwerpen Central Station in Belgium, St. Panclas Station in UK, and CFM Maputo Central Station in Mozambique.

Tsuzumi-mon is supported by two thick pillars with a height of 13.7m.
The image is the tsuzumi (Japanese hand drum) of Noh (*1 ), which is a traditional performing art.
The reason why the designers imagined the Japanese hand drums used in Noh is that Kanazawa has long been loved by many people because it has been integrated into their daily lives.

And even now, that culture has been passed down, and there are also fine museums specializing in Noh, such as the Ishikawa Prefectural Noh Theater and the Kanazawa Noh Museum.
It is said that this design was made from the desire to welcome tourists with the Noh that has been loved by people so far and the gate that is inspired by the Japanese hand drum used for it.

Function of the pillar of Tsuzumi-mon

The pillars are assembled in a spiral shape, and the combination with the gently curved roof is beautiful, and there is delicacy in the slender style, making it a very wonderful gate.
Yonematsu of the Pinaceae family is used for the structural material of the internal frame.

At Tsuzumi-mon, where attention is focused on its unique appearance, water pipes run through the two pillars, and even if rain accumulates on the ceiling or snow accumulates, it will flow to the water pipes.
Kanazawa, which is a region with a lot of snow, has been devised.

The gate is a symbol that embodies the ancient traditions of Kanazawa and the thoughts of the people who live in Kanazawa in order to entertain tourists who have come to Kanazawa.

Before going to the sightseeing spots in Kanazawa, why not stop by for a little 10 minutes.